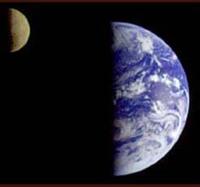 I had two experiences in which I went out of body into space. The first one was several years ago. I went to a lecture on Atlantis, the lecturer was a past-life regressionist and did a group regression with the audience. I did not know when I went to the lecture that he was going to regress us. In the induction phase of the hypnosis, he had us rising above our bodies and spiraling up. I felt physically as though I was spiraling out of body, and then sort of took off. I was flying and the sensation was exactly like flying, the wind touching my face

He did not instruct us to go out into space, but in no time at all, I had spiraled way above the earth and was looking down at it. It was a very strange sensation, as though I was lighter than a feather. I felt presences I had not been previously aware of, the stars and planets seemed conscious, I did not feel alone. I was surprised and amazed to be looking down at earth like an astronaut without a space ship. It was awesome and the universe seemed aware and the earth alive. I felt connected to the universe. In my awe, surprise and shock I realized I had overshot my mark. The lecturer had instructed people to be above rooftops and was now instructing them to descend into the time of Atlantis. I then rejoined his instructions and saw a past life there. I was skeptical about the regression but completely awestruck by my experience of going out into space.

The second experience was when I went to an acupuncturist for help with pain in my feet. In the consultation, I felt it necessary to warn him that I had had many strange experiences regarding energy and asked him if he knew about Kundalini. Since he knew about chi I tried to relate to him about prana. I explained that I had an active Kundalini and that I sometimes had seizure like movements called kriyas. I wanted him to know that in messing with my energy meridians it might affect Kundalini and I didn't know what might happen but I wanted him to be forewarned and instructed him to not call 911 if anything strange occurred. I gave him the name of a person to call, in case something happened and I lost consciousness. I made an appointment and when I had my first acupuncture treatment I had the out of body experience that sent me out into space. As he was inserting the needles I went out of body above in a black void. I could still hear his voice and he began talking about Taoist Philosophy. I loved hearing him talk about his beloved philosophy and so in subsequent sessions I would ask him a question just to hear him talk about it. But in this first treatment, as he talked I heard him saying that in Taoist philosophy the entire universe is interconnected. I shot out of the void into the universe so fast I didn't know how I got there. I can only wonder if the void was some kind of a black hole that could be a passage to anywhere. As he spoke, he said that if one planet was moved it would change the whole universe. I found myself orbiting a living earthlike planet. But it was not earth. I knew there was life on this planet, it appeared very green and there was water but less of a water to land ratio than earth, more land and less ocean. As I orbited this planet I was amazed that I was there circling a planet that had life, but was not earth. There were less clouds than earth. I again felt the presence of consciousness in the universe and felt at one with the universe. I did not feel alone, I felt the presence of consciousness behind me and turned my attention toward the stars and planets only to become more aware of the stars and planets as being conscious of me.

The universe was my home in this expanded state of awareness and I felt as though I was the universe. I felt loving feelings toward this planet , of kinship with it. Sometimes words are not quite sufficient to express the feelings and this was one of those times. I felt the beauty and joy of the universe, its interconnectedness and expansiveness. I felt at one with the universe. It was a joyful awesome experience. I was not as shocked as the first experience, probably because of the first experience the sensations and feelings were more familiar, it did not feel as strange. When he finished putting the needles in my body, he said he was going to leave and come back in 10-15 minutes and asked me if I was OK. I was back in my body as quickly as I had shot out into space and mumbled something back to him as he left the room. I was still feeling the feelings of peace, expansiveness and a total rush of energy. I laid there in complete bliss until he came back to remove the needles. When I sat up, he helped me sit up. I was dizzy and lightheaded from the energy and the experience. I was difficult to stand and walk. I could not talk or verbalize my experience at that time. I had to sit in the waiting room for awhile and I touched the potted living plants to attempt to ground myself. Finally I was able to leave but was so "spaced out" from the experience and the energy rush, I couldn't do much the rest of the day. At my next appointment I told him I had had an out of body experience during which I had gone out into space but didn't go into detail.

I have had many EHE experiences and out of body experiences, all of which it would take a book to explain how I have been changed. But as to these two it is difficult to separate them out in the ways I that I have had my identity affected but overall, but I identify more with spirit and having an eternal soul than before the spiritual emergence. My body in this incarnation is identified as Nancy . Nancy is an ego and her life is but one of many journeys this soul had taken into the physical realm. I live as Nancy but am a part of the universe, interconnected with the universe and all its separate consciousnesses and am one with the universe. I feel either separate, interconnected or at one with all to varying degrees and at some times more one state of consciousness than others. The space trips were about the universe and its consciousness and oneness, and being interconnected with the large bodies in the heavens.

It is about expansiveness within this physical dimension. It is about life and about being without limits of consciousness. These were wonderful blissful and awesome experiences in which I experienced a state of consciousness that is unique and I wish everyone could experience. Exceptional Human Experiences change us, like the Taoist philosophy, move one planet and everything shifts. One change or unique experience and all is changed. I feel that in this lifetime I am to bridge the spiritual dimension with the human dimension and it is my hope that what I have written here is a part of that work. I am a therapist and specialize in helping people to relate to their lives and problems in a way that they will grow spiritually in the process. I work with clients who are distressed and confused by Spiritual Emergence, EE & EH experiences or don't know how to integrate them into their lives. Many people try to deny or invalidate their own experiences, because to acknowledge them as real will change them and that is frightening for some people. It is my hope that people will not be frightened by the strangeness of these experiences, but feel the joy and wonder of the universe instead.

The free online CSS code beautifier takes care of your dirty code and strips every unwanted mess. Go to the CSS Cleaner to get started.

The best way to reach me is email